Tombs of the Kings

The Tombs of the is a large necropolis lying about two kilometres north of Paphos harbour in Cyprus. It is a UNESCO World Heritage Site.

The underground tombs, many of which date back to the 4th century BC, are carved out of solid rock, and are thought to have been the burial sites of Paphitic aristocrats and high officials up to the third century AD (the name comes from the magnificence of the tombs; no kings were in fact buried here). Some of the tombs feature Doric columns and frescoed walls. Archaeological excavations are still being carried out at the site. The tombs are cut into the native rock, and at times imitated the houses of the living.

Although the tombs have been known and casually explored for centuries, they were first subjected to systematic excavation in the later 1970s and the 1980s under the direction of Dr Sophocles Hadjisavvas, former Director of Antiquities of the Republic of Cyprus.

Dr Hadjisavvas is preparating the finds for publication with assistance from the Australian archaeological mission to Paphos.

Part of the importance of the tombs lies in the Paphian habit of including Rhodian amphorae among the offerings in a burial. Through the manufacturing stamps placed on the handles of these amphorae, it is possible to give them a date and, through them, the other material from the same burial.

Thus, it is hoped to develop a more secure chronology for archaeological material in the Eastern Mediterranean of the Hellenistic and early Roman periods. 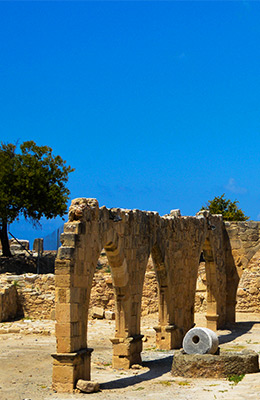